The Seniors section of the golf club run a handicap qualifying competition entitled the Pinson. This consists of six separate rounds with one competition a month starting in April ending in September. The winner needs to have the best three combined Stableford scores to count of any rounds he has played.

We have two separate trophies for age categories 55 to 69 years of age and one for 70 years of age and over. On investigation about this competitions origin it seems John Pinson was the Seniors Captain back in 1994 apparently he came home from a holiday in the USA with a golf bag signed by lots of top American golfers such as Arnold Palmer, Jack Nicholas etc. He kindly donated the bag to the senior section for a competition prize and it was won by Bob Eden our past member, Bob in fact had the honour of Captaining the Staffordshire county side in his early days. I can only surmise that as a thank you for this very generous gesture the senior section put up this Pinson trophy in his honour. Unfortunately, due to the lockdown situation we were only able to play four competitions this year.

The over 70’s category was won by Bryan Harrison his picture is below left.

The 55 to 69 section was won by Mike Jervis on the right. 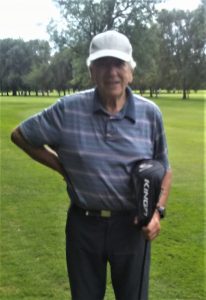 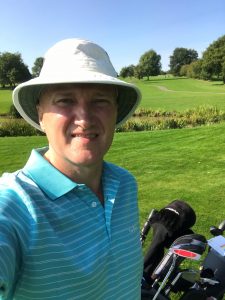 The final senior’s section fixture is on Tuesday 20th October a Stableford non handicap competition, this replaces year our traditional shotgun and presentation event. The £10 entry include a sandwich and bowl of chips and incredibly good prizes, there are still a few time slots left, check the list on our notice board in the locker room.